Austin – The Texas Commission on Public School Finance met for their inaugural meeting today in Austin.  Highlighting the “explosion of property taxes in Texas”, Senator Bettencourt (R-Houston) presented data showing property tax levy growth from 2006-2016.  Over this period, local school property tax levies have only grown by 43%, due to legislative buy downs of property tax rates and a recent homestead exemption increase. Notably county, city, and special district property tax levies have grown 69%, 72%, and even 102% respectively, or much faster than ISD revenues.  That is why Senate Bill 1, as passed by the Texas Senate in the last Special Session, focused on slowing the growth of property tax revenues in these jurisdictions.

“Thus the real data shows that school property tax levies are actually growing much slower than property tax revenues collected by counties, cities, and special districts,” said Senator Bettencourt. “The plight of the taxpayer is clear, average property tax bills are rising roughly twice as fast as Texans’ paychecks. As a taxpayer advocate we need to reduce growth rate to something that Texans can afford.” 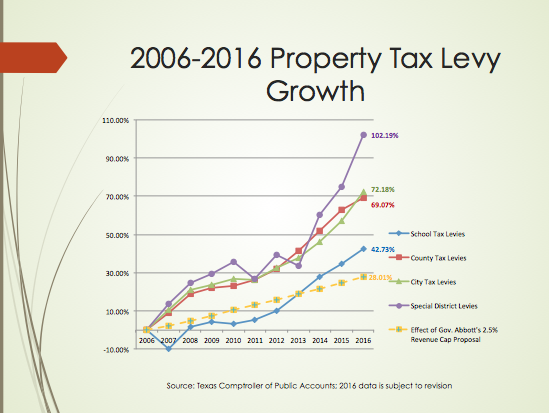 During the course of the hearings, Senator Bettencourt hopes to include several important discussion items such as current best practices, performance based pay, classroom pay versus administrative expenses, and alternative funding scenarios other than just a weighted average daily attendance model.

“Already the commission has heard testimony that the Texas education system has actually improved over the last several years,” continued Senator Bettencourt. “In fact, Texas is 4th in the nation in four year graduation rates, at 89%, and is the 2nd ranked state to Massachusetts on overall performance, adjusted for our state demographics. The issue will be to maintain this positive momentum for our school kids while balancing that with the taxpayers ability to pay.”